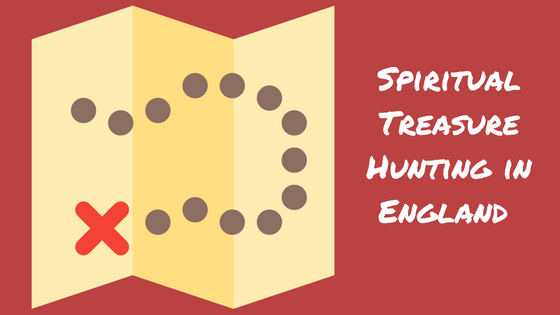 Going on spiritual “treasure hunts” has been a creative way to reach out to people with God’s love. We learned about this prayer method from the book, “The Ultimate Treasure Hunt” by Kevin Dedmond. It has given us opportunity to help people experience a powerful encounter with our loving God.

Doing spiritual treasure hunts is a simple process that is easy to learn. First, we pray and ask God for clues and write them down. The clues fall into five categories: location, names, appearance, prayer need, and unusual. Then we go out in teams, looking for people who specifically match the descriptions. When we find someone who matches our clues, we talk with them and offer to pray for them.

For example, we pray and come up with “red hat,” “vacation,” and “grandmother with cancer.”  After walking down the street, we see a man wearing a red hat that is standing next to a vacation booking agency. We approach the man and explain that we have prayed for God to direct us to someone, and that He gave us clues that match the man’s appearance.  We go on to ask the man about his grandmother’s health, and he tells us that she has cancer and that he has been quite worried about her. That creates an amazing opportunity for us to ask him to pray for him and for his grandmother. People are often touched when God so specifically leads us to them and points out their particular need to us before we even meet one another.

During her first treasure hunt experience, one  young woman approached four teenage girls that matched the clues she received, and boldly  prayed for one girl with her arm in a cast and sling from a fractured wrist. The girl said her wrist started to feel better, so she decided to make a tight fist and move her wrist as much as the cast would allow. She was astounded that it was loads better instantaneously. The woman who approached the girl told her that this happened through Jesus’ power and that she is God’s treasure.  The girl was moved, and later she was more confident to ask God what else He wanted to do in her life.

Only ten minutes later, that same woman and her team had a long talk with a young man who had recently been told that he had growths in his stomach. After the team prayed for him, he felt much peace, and they asked him about his relationship with God. He told them that although he prayed every night, he was unsure if God truly accepted him. He was very willing to listen to them explain the gospel of forgiveness and new birth, and then they encouraged him to take a literal step across a line in the sidewalk to indicate he was stepping into new life.

Moreover, it is neat to see these treasure hunts not only impact the people who receive prayer, but also the participants themselves as they realize that the Lord is partnering with them.

Just like in life, spiritual treasure hunts will have moments of discouragement, which participants need to acknowledge and overcome. This can mean putting aside personal feelings and continuing out of simple obedience. On these occasions, the next thing that happens is often a real breakthrough. For instance, one day a group of teenage boys were quite disrespectful towards us as we started our treasure hunt. This was very unusual and we were taken aback. When they had moved on, we prayed and declared it was payback time against the enemy and that God would give us favor. Within an hour, our clues led us very clearly to a sincere young man who decided to give his life to Jesus.

Over the years, we have seen many people encouraged in their journey towards the Lord by the encounters on these spiritual treasure hunts, because they realize that the Lord know them intimately and cares about their needs.

View all posts by dickscoggz